We look forward to welcoming Tracy Lawrence to Billy Bob’s Texas for New Year Eves on Friday, December 31.  We offer a one-of-a-kind experience in the heart of the Fort Worth Stockyards! While you’re here check out the Honky Tonk Kitchen, Billy Bob’s gift store, and the Handprint Wall of Fame!

Show Details
Tracy Lawrence at 10:00 PM on the Main Stage
House Band at 8:00 PM on the Honky Tonk Stage
Doors Open at 6 PM 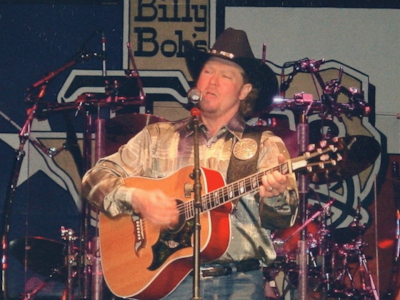 Tracy Lawrence, at the peak of his career, joins Kenny Chesney on stage in February of 1999.

Tracy Lawrence is one of the most recognizable voices in Country music with songs such as “Paint Me A Birmingham,” “Time Marches On,” “Alibis,” and “Find Out Who Your Friends Are.” The entertainer has enjoyed twenty-two songs on the Billboard top ten charts with eighteen number one singles, selling over thirteen million albums.

The Multi-platinum CMA and ACM award-winning recording artist has helped shape the sound of Country music for two decades, recently celebrating twenty years in music. Few country artists have ever known the kind of success that Tracy Lawrence has earned and the influence his iconic voice has contributed to the Country music genre.

His music has inspired a whole new generation of entertainers and fans. Jason Aldean and Luke Bryan frequently pay tribute to the singer live in concert by playing his double-platinum hits like “Time Marches On” and Alibis.” Songs that help make Lawrence one of the most played artists on the radio.

Lawrence has set out to embark on the next chapter of his music career with his highly anticipated forthcoming studio album Headlights, Taillights And Radios to be released August 2013. The first single, “Stop Drop And Roll” written by hit songwriters Casey Beathard who penned Lawrence’s CMA and ACM award-winning hit “Find Out Who Your Friends Are” and Brandon Kinney, marks the singer’s first studio album in five years.

Headlights, Taillights And Radios is not just another release for Lawrence, it’s a testament to how his music continues to evolve and engage all generations of Country music fans. The 11-song collection features some of his most progressive music to date.

Reflecting on the creative process when recording Headlights, Taillights And Radios Lawrence knew that he needed to push the envelope and creativity to a new level. “When recording the new album it was a very different process than I had ever done before,” said Lawrence. “We ended up recording the album in two parts, that’s just how it worked out. I started recording in the direction to make a more traditional County record. But as time progressed, I needed to explore and challenge myself musically. I wanted to go deeper and try a more edgy and progressive sound that reflected where I was going next. The combination really worked well for me and I think it will appeal to many different types of County music fans.”

The album title Headlights, Taillights And Radios carries a signature meaning for the artist. “Headlights” looking to the future; “Taillights” celebrating the past; and “Radios” a tribute to his success on radio.

Headlights, Taillights, And Radios gives us a new Tracy Lawrence. One that is sure to inspire and ignite a whole new generation of Country music.