We look forward to welcoming Toadies to Billy Bob’s Texas on Thursday, December 30. We offer a one of a kind experience in the heart of the Fort Worth Stockyards! While you’re here check out the Honky Tonk Kitchen, Billy Bob’s gift store, and the Handprint Wall of Fame!

Show Details
Toadies at 10:00 PM on the Main Stage

Eleven Hundred Springs at 9:00 PM on the Main Stage
Doors Open at 6 PM 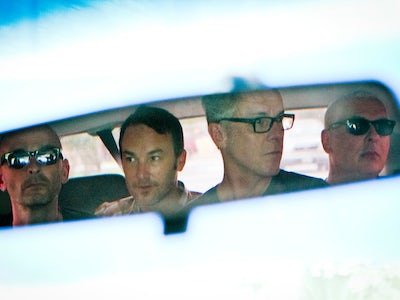 It’s been 25+ years since the Toadies started playing rock music in Fort Worth, Texas. Through lineup changes, shelved albums, band break-ups, and reunions, the Toadies have experienced nearly everything.

They burst onto the scene in 1994 with the breakthrough Rubberneck, including the singles “Possum Kingdom,” “Tyler.” Toadies returned to the studio in 1998 with the pressure of trying to match their first album’s success. That success didn’t translate to label support. “We got approval for a record,” says Vaden Todd Lewis, “ somewhere it got unapproved. So we went back to the drawing board.” Eventually some tracks made it onto Hell Below/Stars Above which came out seven years after Rubberneck. Disappointed and dejected, the band dissolved just a few months later.

A one-off show in 2006 became a full-fledged reunion and ever since, the Toadies have steadily built momentum. A third album, No Deliverance, came in 2008 and saw the band selling out shows nationwide while also playing Lollapalooza and ACL. The “lost album,” Feeler, finally materialized in 2010 followed by Play.Rock.Music. in 2012. In 2014, Toadies celebrated the 20th anniversary of Rubberneck. In 2016 Toadies released Heretics, an acoustic twist on classic songs. The band is currently finishing a new record with Rubberneck producer Rob Schnapf for a 2017 release.