We look forward to welcoming The Panhandlers to Billy Bob’s Texas on Thursday, October 29. We offer a one of a kind experience in the heart of the Fort Worth Stockyards! While you’re here check out the Honky Tonk Kitchen, Billy Bob’s gift store, and the Handprint Wall of Fame!

Show Details
The Panhandlers at 9:00 PM on the Main Stage
Houe Band at 8:00 PM on the Honky Tonk Stage
Doors Open at 6 PM
*Please note that there will be no valet or bull-riding on this night. 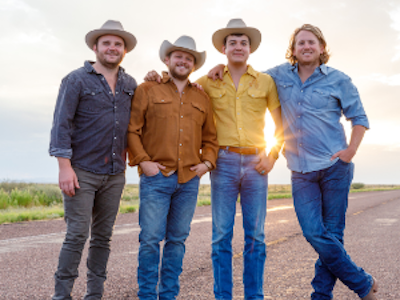 West Texas. Rural and rugged, the area has inspired some of the most striking American roots music of the past 70 years. Its native sons include Buddy Holly, Terry Allen, Waylon Jennings, Bob Wills, and the Flatlanders — a roster of country singers, western swing pioneers, and rock & roll originators whose songs affected an entire nation, even as they nodded to the artists’ windswept stomping grounds. Decades after those songwriters sang the praises of West Texas, a new group of musicians have begun proudly carrying the torch, creating music that’s both regionally-inspired and universal.
​​
​​The Panhandlers aren’t your typical hometown heroes. Separately, the band’s four members — Josh Abbott, John Baumann, William Clark Green, and Flatland Cavalry’s Cleto Cordero — are acclaimed songwriters and road-tested frontmen in their own right. Together, they’re a true powerhouse representing some of Texas’ most beloved musical exports, rolling their talents into a band whose homegrown country music revisits and revises the classic influence of West Texas. Tracked live to analog tape by producer Bruce Robison, the group’s self-titled debut is a modern record for old souls — a record written by contemporary Texas-based musicians and recorded in the old-school, the straight-to-tape spirit of their 1960s and ’70s influences.
​​
​​“The sound is a sonic landscape right out of a hot afternoon in Lubbock, Texas,” says Baumann, who shares songwriting credits and frontman duties with his three collaborators. “It’s loose and warm. The lyrical pictures are all like something off an old postcard, each one with its own story to tell, with the backdrops being little vignettes of life on the South Plains Panhandle region of Texas.”
​​
​​Initially envisioned as a collection of cover songs honoring the sound and spirit of West Texas (specifically area legends the Flatlanders), the Panhandlers’ debut grew into an original record during a songwriting session in Marfa, Texas. There, on a high plateau in the Chihuahuan Desert, the four songwriters began collaborating for the first time. Later, after reconvening in the recording studio with Robison, they reignited the creative spark by capturing each song in two or three takes, focusing on performances that mirrored the unpolished charm of the West Texas territory.