We look forward to welcoming The Damn Quails to Billy Bob’s Texas on Friday, February 11. We offer a one of a kind experience in the heart of the Fort Worth Stockyards! While you’re here check out the Honky Tonk Kitchen, Billy Bob’s gift store, and live bull riding!

Show Details
The Damn Quails  at 10:00 PM on the Main Stage
House Band at 8:00 PM on the Honky Tonk Stage
Doors Open at 6 PM

About The Damn Quails 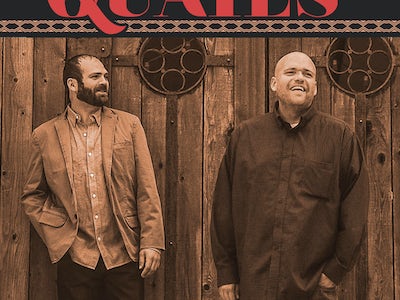 ABOUT THE DAMN QUAILS: The Damn Quails started as a weekly jam session between two Oklahoma songwriters. Gabe Marshall and Bryon White met for a weekly gig that soon attracted all kinds of characters playing various instruments.  These sessions quickly attracted a crowd, a semi-stable line-up was formed, and The Damn Quails were born.  The band released their first record in 2011 entitled “Down The Hatch”.  Since then, the band has firmly established itself as a touring entity hell bent on spreading their brand of music as far as possible. The Damn Quails carry on the great Oklahoma tradition of songwriting that draws from countless genres and has produced many memorable songs, bands, singers, and moments.  They are proud to be part of such a rich musical heritage. They have taken their cue from their musical predecessors and forged their own and style that they loosely refer to Folk Rock. From the beginning Bryon and Gabe have had Thomas Young as their drummer.  Not only does he keep the beat, but he also serves as a very stabilizing character that provides a very solid foundation on which the guys have built their musical monuments.  Joining them playing a vast array of instruments is Kevin “Haystack” Foster.  Kevin is a brilliant musician and singer who adds a dimension to the show that is undeniable.  It seems like he has been there forever.  On bass you have a close friend of Kevin’s and a ball of positivity and energy known as Dillon Sampson.  Dillon and Kevin attended South Plains College in Texas where they studied music.  They are proud to bring their friendship and dedication to great playing to The Damn Quails. Upon its release “Down the Hatch” quickly became a favorite of both music critics and a growing legion of fans that is now refereed to as “The Covey”.  The record spawned the radio singles “Fool’s Gold”, “So So Long”, and “Me and the Whiskey”. Just as the band was hitting its stride, they suddenly found themselves in a legal struggle with their management company and record label.  The situation soon deteriorated in such a way that lawsuits were filed and the band found itself fighting to keep the rights to their own name, music, likeness, and everything associated with The Damn Quails.  The band did the only thing it could do and continued to tour and spread the good word the only way they knew how, by playing live.  Night after night the band made friends and fans across the country.  For much of this time they had no CDs or t-shirts to sell to help keep themselves going.  All they could do was play.  This situation would have destroyed most bands, but The Quails chose to never give up.  They had their music, themselves, and of course The Covey to help them along their way. After two years the lawsuit was finally settled.  The band was given the ownership of the name The Damn Quails, and was finally allowed to record and release new music.  Finding themselves without a label or any financial backing, the band turned to the people whose support had never wavered, The Covey. They started a Kickstarter Campaign in January of 2015 that raised almost $55,000 dollars to record their new record.  They enlisted David Abeyta from Reckless Kelly to produce the record which they recorded in Austin, Texas at 12th Street Sound.  They emerged with “Out of the Birdcage” which will be released on their own label Swomp Fyst Records on September 4th. The title signifies the freedom the band feels having finally emerged to follow their true path, a path where they own their own future and are in charge of their own destiny.