The BBT team has been working diligently with artists and their representatives to evaluate possible postponed or rescheduled shows.

We are happy to announce that Stoney LaRue, originally scheduled for Saturday, April 25, has been rescheduled to Saturday, December 5.

A note from the BBT Ticketing Manager

Please only email tickets@billybobstexas.com with refund requests at this time. Be sure to include as much relevant info as possible. Thank You!

We look forward to welcoming Stoney LaRue to Billy Bob’s Texas on Saturday, December 5. We offer a one of a kind experience in the heart of the Fort Worth Stockyards! While you’re here check out the Honky Tonk Kitchen, Billy Bob’s gift store, and live bull riding!

Show Details
Stoney LaRue at 10:30 PM on the Main Stage
House Band at 8:00 PM on the Honky Tonk Stage
Doors Open at 6 PM 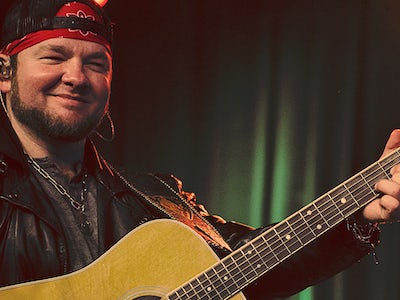 “I like to connect with people at any age, whatever it might be sonically or to the depth of what they are willing to think. I like to think, and I like people to think and that often generates a connection that can be nurtured,” says Stoney LaRue. As he prepares the release of Us Time, LaRue reflects on this important connection he has fostered with his fans over his 15-plus years of touring. Together, LaRue and his fans have culled together a “favorite live song set” that is dedicated to his loyal and growing fan base. Stoney LaRue is known for his real life, thinking man’s music. US TIME is a collection of songs from the native Texan who now resides in Oklahoma reflecting on his own dreams that openly shares with his longtime fans. “This project is a tribute to my fans. We have developed a strong relationship and I appreciate all of them,” says LaRue. “ Together, we have built a compilation of fan favorites from the live shows that reflect the complexion of our time together in music, it is simply our US Time, “ he continues. This sentiment rings even louderafter LaRue took a hiatus from touring this summer to re-center his life that seemed to be lost. Stoney LaRue says, “Being able to record such timeless songs as “Empty Glass,” “Into the Mystic” and “Wichita Lineman” aside some of original tunes, all selected by my fans make me feel validated as an artist and hopefully it gives the fans exactly what they are looking for.”