We look forward to welcoming Sam Riggs to Billy Bob’s Texas on Friday, August 20th. We offer a one of a kind experience in the heart of the Fort Worth Stockyards! While you’re here check out the Honky Tonk Kitchen, Billy Bob’s gift store, and live bull riding!

Show Details
Sam Riggs at 10:00 PM on the Main Stage
House Band at 8:00 PM on the Honky Tonk Stage
Doors Open at 6 PM 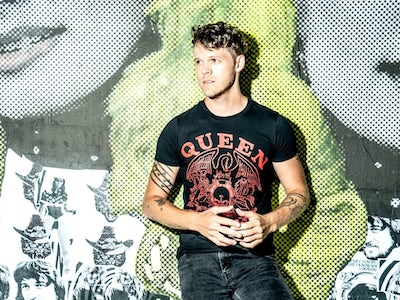 Sam Riggs was flying a single-engine plane from Austin, Texas, to San Angelo in the spring of 2017 when he heard the oddest sound: Nothing. Catastrophic engine failure. He’d lost all power, and had about 6,500 feet to figure out how to escape a potentially fatal problem.

“There was,” he admits, “a moment of panic, a moment that felt very surreal.”

But Riggs pulled it together. With the help of air traffic control, he found an abandoned airstrip on a Lone Star cattle ranch and touched down without a scratch. One of his most perilous moments ended up becoming one of his smoothest landings as a pilot.

It’s something of a metaphor for Riggs’ life. He’s a wild live performer, an inveterate risk-taker and an enthusiastic adventurer. As a self-sustaining, independent singer/songwriter, he’s taken a leap of faith on more than one occasion, always willing to back up his plunges with a voracious amount of work. So he shrugs it off a bit when he thinks about how close he came to the edge in his aviation exercise.

“That’s just how my life has always gone,” Riggs says with a laugh. “I’ve sort of become used to it.”

The sense of daring is a key element in Riggs’ brand of country, a rock-infused sound with a chip on its sonic shoulder from a guy who counts Garth Brooks, Foo Fighters, George Jones and Blink-182 among his influences. Between the swampy, thumping hard-rock crunch of “Angola’s Lament,” the mysterious darkness of “Long Shot” and the feverish snarl of “High On A Country Song,” all of those raucous, rebellious elements find their place inside the boundary-pushing attitude on the two albums and two EPs Riggs has created on his own dime since 2010.

The music has become an essential piece of the red-dirt scene in Texas, though it’s earning a distinct spot in the national consciousness as well. Riggs’ last album – the 2016 release Breathless, distributed by indie Thirty Tigers – debuted at No. 12 on the Billboard Country Albums chart.

Others would view it as a major accomplishment to land in the same turf occupied by established acts backed by classically-branded companies, such as RCA Records, MCA, Warner Bros. or Columbia. But for Riggs, it’s just another plateau on the way to something bigger, even if he’s not sure what that something is.

“Life is full of mountains,” Riggs maintains, embracing the challenge. “I have to have something to climb. As soon as I climb one mountain peak, I’m looking for the next one, and that’s sort of what music has been for me all along.”

While much of Riggs’ life has been lived uphill, he’s confronted at least as many emotional challenges as geographical ones. He hails from St. Cloud, Florida, where the Everglades create a flat, steamy environment. Disney World and the beach were both within driving distance, but neither was part

of his reality. He was surrounded by orange groves, cattle ranches, snakes and wetlands. And his home life was less than ideal. His parents split when Riggs was 2 and his older brother, Mike, was 4. The stress his mother faced created a childhood that he now considers “tumultuous.”

But music provided some relief. His mother, author K.J. Radebaugh, turned the home into their own personal coffeehouse at night, playing guitar for her boys and taking requests – three songs apiece – before they went to bed. Her performances of “Me And Bobby McGee,” Irish folks songs and “Mammas, Don’t Let Your Babies Grow Up To Be Cowboys” gave Sam an early taste for country music.

In the meantime, Riggs’ dad took him to see Garth Brooks in Orlando in 1998 on the three-year world tour that preceded his retirement. The effects and Brooks’ command of the audience were mind-blowing, and life-changing, to a 10-year-old.

“When they played ‘The Thunder Rolls,’ all the lights went out in the arena, and then the thunder rolled in, and there he was in a spotlight on the stage playing that guitar,” Riggs recalls. “The rain was coming down around him, and it was like, ‘This is unreal. I have to do this.’ I had already wanted to be a singer – every little kid wants to be a singer at some point – but it was like, ‘This is it, I have to find a way to do this.’ And I’ve been chasing it ever since.”

Sam and Mike both picked up the guitar, and Sam moved on to the trumpet and drums by the time he hit high school. He immersed himself in percussion and went on occasion to downtown clubs in Orlando to watch his instructor play with some jazz bands.

Riggs was restless, though, and his rebel spirit kept him from fully embracing the school band’s regimen. He was asked to leave the drum line, but that experience still influences his music today. There’s an oblique homage to that period in the marching-band percussion in the closing minute of one of his songs, “Lucky Ones.” And Riggs is known to pull out a drum in sections of his live shows.

Not long after high school ended, Riggs left the state in his pursuit of the music. He had two obvious options: Nashville or Austin. Texas won out – his aunt was moving there, and Riggs thought that made the Lone Star State practical.

“If things went wrong in Nashville, I didn’t really have any couches nearby,” he says.

Riggs had already been writing songs informally in Florida, but he got serious about it in his new life. He picked up a welding job to fund himself and enrolled at Austin Community College, where he took a songwriting course taught by Robert Skiles. Riggs became obsessive about the subject – so much so that, once again, a teacher asked him to quit.

“I stopped going to all my other classes,” Riggs says. “At the end of class one day, he said, ‘Riggs, see me after.’ I went down and he said, ‘I need you to drop out. You’re not going to college, you’re just coming to my class.’”

But Skiles’ dismissal wasn’t entirely negative. He told Riggs point-blank, “You’re supposed to be out there doing it.”

School wasn’t the only thing that came to a close. Riggs lost his primary welding gig, too, but he became the ultimate freelancer, picking up odd jobs with his own gear as a welder and playing clubs with his band, which he eventually branded the Night People, a name derived from a line in “Rabbit,” a song by another of Riggs’ mentors, Americana icon Ray Wylie Hubbard. When the economy crashed in the late-2000s, the work dried up, and Riggs took what he calls “the ultimate gamble.” He sold his welding equipment and his truck and invested the money to make his second EP, 2012’s Lighthouse.

It was the equivalent of turning the engine off by choice, just to see if he could land the plane under his own guidance. In Sam Riggs style, the risk paid off. People discovered the music, his ticket sales spiked, and he found himself a working musician with his own band and a distinctive sound.

To date, he’s racked up more than 2.2 million streams on Spotify and over 600,000 views on YouTube. A number of his singles hit the upper levels of the Texas charts, including the ultra-country “Hold On A Let Go,” the thumping concert re-creation “High On A Country Song” and his vulnerable “Second Hand Smoke.” To top it off, Riggs picked up the Texas Regional Radio Award in 2016 for Top New Male Vocalist.

Now hoping to break into the Top 10 on the Billboard Country Albums chart with his next release, Riggs sees this project as a crucial one. He’s purposely slowed down the recording process, making sure that if the album gets increased attention, it’ll live up to the hype.

That’s not a sign that he’s gone soft. Riggs has always marched to his own drum line, and a book by Donald Miller, A Million Miles in a Thousand Years, crystallized for him the importance of choosing adventure.

It’s why Sam Riggs can keep his composure in the middle of catastrophic engine failure. It’s why he could drain his assets to invest in an uncertain future as a musician. And it’s why both his albums and his concerts are fueled with a bit of daring and unpredictability. Riggs is an adventurer. That’s true in his music, and true in his life.