Robert Cray scheduled for Friday, January 22, has been rescheduled to Friday, November 5.

We look forward to welcoming Robert Cray to Billy Bob’s Texas on Friday, November 5. We offer a one of a kind experience in the heart of the Fort Worth Stockyards! While you’re here check out the Honky Tonk Kitchen, Billy Bob’s gift store, and the Handprint Wall of Fame!

Show Details
Robert Cray at 10:00 PM on the Main Stage
House Bande at 8:00 PM on the Honky Tonk Stage
Doors Open at 6 PM
Please plan to arrive early as the process to get into Billy Bob’s Texas will take longer than normal due to the new COVID-19 safety protocols.

For fans of Jimmie Vaughan, Keb’ Mo’, The Fabulous Thunderbirds 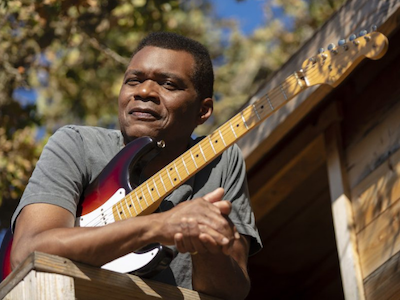 Hearing is a funny thing. It’s not just receiving sound — it’s understanding and interpreting it, making sense of the various vibrations swirling around our heads. That’s how two people can listen to the same thing, and come away with opposite impressions. The sounds may be the same, but the comprehension isn’t.

That’s What I Heard as the title for this, but it does kind of fit. For example, the first time I played the album, I was struck by what seemed to me to be a distinct Sam Cooke vibe to the music, an impression initially sparked by the rollicking gospel groove of “Burying Ground,” but also by the sweet singing and classic 6/8 feel of “You’ll Want Me Back.” It wasn’t just the churchiness of the former, nor the tuneful sophistication of the latter; it was the way those two elements intertwined to create a feeling that was just as evident in the other songs.

Imagine my surprise, then, to hear drummer and producer Steve Jordan a week later, describing his vision for the album. “I thought if it we could get this thing that Same Cooke used to have, the kind of sound that early Sam Cooke records had, that we could pull this off,” he said. Hey, that’s what I heard!

From Jordan’s perspective, getting that sound had two components. First, the artist has to be able “to perform at a live capacity, a very high level,” he said “The way Robert sings and plays, that’s at the highest level. So, boom. We got that.” The second requirement is having the environment and personnel capable of capturing that sort of energy. In an age of bedroom studios and digital recording apps, there aren’t a lot of people left who know how to capture that live-inthe-studio excitement. “Fortunately, the person who got that sound, I happen to know personally,” Jordan explains. “And that’s the great Al Schmidt,” who Jordan paired with the equally excellent Niko Bolas. (“They’re very close friends,” he said.)

After Jordan put everyone into L.A.’s Capitol Studios — “one of the best studios in the world” — he had the perfect mix. “You have the great engineers, in a great studio, with a great artist” he said. “It’s very hard to screw that up.”

It also didn’t hurt that Cray and his band came in hot from the road to begin work on the album. That much is audible in several tracks, most notably the irresistibly driving albumopener, “Anything You Want.”

“We were at S.I.R., rehearsing in Los Angeles,” he recalled. “We just we were just killing time, and then the chords came out. I started playing, and everybody fell into it, and it was there. We were in the mood, you know?”

In many ways, “Anything You Want” is classic Cray, with a blues heart powering a popsavvy melody, and a lyric that’s less about love lost than the difficulties in keeping love around. The verse is three-chord simple with a sly turn-around on the bridge, but what makes the track work is the way each player does his part, with new drummer Terrence F. Clark laying down a rock-solid backbeat while Richard Cousin’s bass provides funky counterpoint to Cray’s jabbing rhythm guitar, and Dover’s organ fleshes the sound out with a comfortable cushion of chords. Naturally, it ends with a guitar solo in which Cray, alternately gruff and lyrical, pushes the groove into overdrive.

“Burying Ground,” which follows, is likely the album’s biggest surprise, a sacred song from the Sensational Nightingales, inspired by Cray’s youth, when Sundays on the stereo were reserved for his parents’ gospel records. “The Sensational Nightingales music has been around all my life,” he said. But even though Cray describes the Nightingales’ Julius Cheeks as “one of my heroes,” he doesn’t try to imitate Cheek’s legendary roar, instead bringing a sad sweetness to the repeated cry of “way over yonder.”

The album’s R&B covers fall into two camps, the sweet and the funky. Of the former, “You’re the One” comes from the Bobby “Blue” Bland songbook. Cray’s version, coloured by his jangly rhythm guitar, has a more pronounced 6/8 feel, and his singing is more insistent, making it feel more like a statement of love than Bland’s relaxed, almost resigned, rendition. “There’s this thing where I feel you kind of gotta get out of your own head when you’re covering one of your heroes,” Cray explained. “Bobby’s one of those. You just let yourself go, and do the song because you love it.”

Then there’s “You’ll Want Me Back,” which Curtis Mayfield wrote for Major Lance. “Curtis Mayfield melodies are just totally irresistible,” said Cray, whose frequent slips into falsetto underscore the sweetness of the music. It’s the sort of performance, measured but persuasive, that makes you wonder why the tune isn’t more widely recognized.

On the other hand, the two funky covers — Don Gardner’s “My Baby Likes to Boogaloo” and the Billy Sha-Rae minor hit, “Do It” — are acknowledged rarities. Indeed, Cray found both a four-CD set Jordan had recommended, entitled Groove & Grind: Rare Soul. “My Baby Likes to Boogaloo” was the first cut, and Cray was instantly smitten. “The lyric is out-ofdate,” he said, “but the groove is now. So funky and so simple. You can get in your own way if you try to do anything more to it. Just stand back, and let it do its own thing, you know?”

“Do It” is leaner and meaner, the sort of bare-bones funk that defined the Detroit club sound in the early ’70s with Sha-Rae, Dennis Coffey, and Earl Van Dyke. Cray’s steamroller rendition gets a little extra push from guest guitarist Ray Parker, Jr., who played in Sha-Rae’s band as a teen.

Split the difference between those two, and you’ll get “Hot,” a Cray original that has “instant replay” written all over it. Like “Anything You Want,” it was composed while the band was rehearsing for the album. “It’s basically just a jam,” said Cray, “a moving, driving, rock n roll kind of thing.” As for the lyrics, “We always say to ourselves, ‘I’m old, but I’m hot,’: he said, and laughed. “I just took that and ran with it.”

The wistful “To Be with You” was inspired by Tony Joe White, although Cray takes it in his own direction after the opening (and dig how the ending feints to a VII chord before resolving). The cool, bluesy “Can’t Make Me Change,” on the other hand, oozes along on what Cray describes as a “Bobby ‘Blue’ Bland kind of groove.”

“I guess we were still inspired from that.” Perhaps the album’s strangest story has to do with “Promises You Can’t Keep,” a song Jordan write with Kim Wilson and Danny Kortchmar for High Water, the T-Birds’ last album. After they’d put down most of the tracks, engineer Niko Bolas had a visit from an old pal, former Journey frontman Steve Perry. “I was upstairs in Studio B, and I came downstairs and I saw somebody in the doorway,” said Cray. “I’m going, ‘Well, who’s standing in the doorway, listening to our tracks?’ Then I looked at him again, and recognized who it was.”

While arranging the tune, Jordan had dropped the original vocal harmonies from the refrain, but when Perry heard the track, he felt that vocal harmonies just had to be there. “He was so convincing, I said, ‘OK, great,’” recalled Jordan. We went in and he sang it — he was so in love with it, he sang it really great. It sounded better with him singing it than the original with me and Kim singing it. One of those magical things that happen in the studio when a friend visits.” —J.D. Considine