We look forward to welcoming Midland to Billy Bob’s Texas on Friday, August 5 and Saturday, August 6, 2022.  We offer a one of a kind experience in the heart of the Fort Worth Stockyards! While you’re here check out the Honky Tonk Kitchen, Billy Bob’s gift store, and the Handprint Wall of Fame!

Show Details
Midland at 10:00 PM (Friday and Saturday) on the Main Stage
House Band at 8:00 PM on the Honky Tonk Stage
Doors Open at 6 PM 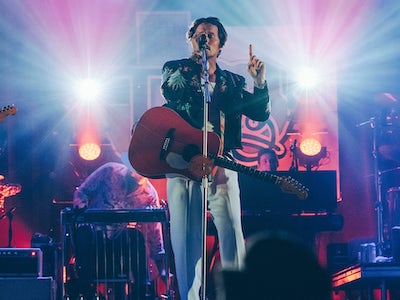 Midland filmed their entire music video in one shot on the dance floor.

Hailing from Dripping Springs, TX lead vocalist Mark Wystrach fronts Midland’s rich sound that is rounded out with lead guitarist Jess Carson and bass player Cameron Duddy. Rooted in tradition in both sound and style, the trio initially garnered attention playing clubs in the region. Their critically-acclaimed freshman album, ON THE ROCKS (Big Machine Records), features 13 tracks with songwriting credits from each member alongside hitmakers Shane McAnally and Josh Osborne. Launching to rave reviews from notable outlets such as the Los Angeles Times and Rolling Stone Country, ON THE ROCKS was declared “the year’s best Country album” by Washington Post.  The Dann-Huff produced album earned the No. 1 position on Billboard’s Top Country Album Sales chart upon release. Their debut No. 1 single “Drinkin’ Problem,” which offers an intentional nod to Country music reminiscent of the 1970s and 80s, earned the band their first GRAMMY® Awards nominations for Best Country Song and Best Country Duo/Group Performance. Midland was also named New Vocal Group of the Year at the 2018 ACM Awards and is nominated for three CMA Awards including Vocal Group of the Year, Single of the Year for “Drinkin’ Problem” and New Artist of the Year. Their current single “Burn Out” is Top 20 at Country Radio and the band released a video for the song which was inspired by the vintage style of Urban Cowboy and filmed at the legendary Billy Bob’s Honky Tonk in Fort Worth, TX. This year Country Radio Broadcasters voted the trio as one of the esteemed 2018 CRS New Faces. Midland is currently on the road headlining dates for their ELECTRIC RODEO TOUR. For a full list of tour dates and more, visit MidlandOfficial.com.