DEAD, DEAD ON THE RANGE:
“The town is bustling with elections, cattle drives, promises of a railroad, and murder!  Horace
Grimsby, the wealthiest Cattle Baron in Texas, has been found dead and it’s up to Marshal Jim
Courtright to bring the killer to justice.”

Special seating arrangement and/or dietary restriction requests should be emailed to tickets@billybobstexas.com 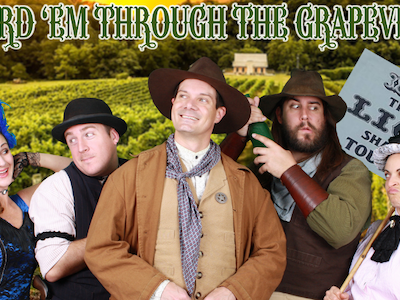 Great Galloping Grapes! There’s trouble in the vineyard! A hired gun has killed (almost) every man in town, and someone has popped the cork of Jacques Bordeaux, the local vintner. A Texas Ranger has come to town to find out who done it. Could it be Dustin Wynn, the trail cook and wine connoisseur, went sour on Bordeaux? Or might Imma Nothavinany, the temperance movement crusader, have chosen to squash the roots of evil? Perhaps the local saloon girl Miss Kitty left the feller in the cellar. Did the new Marshal, Pete Dooling, find that the town wasn’t big enough for the both of them? Grab a glass of wine and watch the good times flow as the Ranger solves this hilariously juicy mystery!

Ranger Jim Courtright – A no-nonsense Texas Ranger determined to uphold the law and catch the killer. However, finding the guilty among this mass of misfits is going to be tougher than herding cats! No offense Kitty!

Marshal Pete Dooling – Once the town’s piano player, Pete has fallen into the role of town Marshal and in love with Miss Kitty.  He’s not a great Marshal, and he’s not great with the ladies.  Would he go so far as to kill Jacques to prove his worth?

Kitrina Katzinsky – The most popular saloon girl in town! Her friends call her “Kat” while her really good friends say, “Here Kitty, Kitty.”  She hopes to improve her social standing and financial portfolio by owning her own parlor.  Just how far will she go to harvest the fruits of her labor?

Imma Nothavinany – Is Imma really an enthusiastic member of the Women’s Temperance Union or is she simply crusading against her past? This one-time party gal seems determined to close down as many saloons as possible. Could she be the one who “turned out the lights” on Jacques’ winemaking party?

Dustin Wynn – After months on the cattle trail this rootin’ tootin’ cowboy is looking to quench his thirst, find some “genteel” company, and take a hot bath… but not necessarily in that order. Did this directionally challenged connoisseur sample Jacques cellars or is he merely in the wrong place at the wrong time?