Live Peace Concerts is a 501c3 charitable foundation whose mission is to produce  “edutainment” festivals and films that foster peace in our communities. The group will host this very special concert!

This Presidents’ Day Bash (so NO work on Monday!), will be a spectacular show at Billy Bob’s featuring many of the best North Texas and Oklahoma artists including;

You won’t want to miss what promises to be the “Hottest Red Dirt Extravaganza” of the new year!

VIP tickets are available at livepeaceconcerts.com

This huge blow out party will sell out fast so get your tickets today!

About Live Peace: A Country United 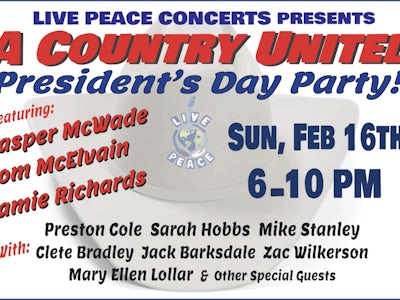 Jennifer Garland, CEO of HEAVEN ON EARTH PRODUCTIONS, (referred to as “HOEP”), has gathered a team to present a LIVE PEACE EVENT to include many who were on the LIVE AID team in 1985. Collectively we now have the technology to reach 4-5 billion people.

OBJECTIVE ONE: To produce content that encourages Peace around the world via MUSIC AND FILM PROJECTS and promote the LIVE PEACE MOVEMENT to a national and global audience.

OBJECTIVE TWO: These LIVE PEACE Concerts will also serve as the primary marketing for the film “The Secret of the Lost Scroll”, the first of 6 ‘Indiana Jones’ style feature films being produced by Heaven on Earth Productions, with an urgent call for Peace in the Middle East and around the globe. It is an epic action adventure story about the Dead Sea Scrolls and is PG13 rated so that we can reach the maximum audience.