We look forward to welcoming Lady A to Billy Bob’s Texas on Friday, July 16.  We offer a one-of-a-kind experience in the heart of the Fort Worth Stockyards! While you’re here check out the Honky Tonk Kitchen, Billy Bob’s gift store, and the Handprint Wall of Fame!

Jameson Rodgers at 9:00 PM on the Main Stage
House Band at 8:00 PM on the Honky Tonk Stage
Doors Open at 6 PM
Please plan to arrive early as the process to get into Billy Bob’s Texas will take longer than normal due to the new COVID-19 safety protocols. 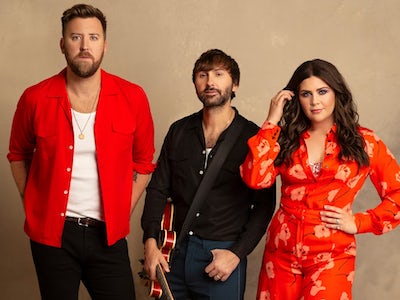 Over the course of their decade-plus career, Lady A has become one of the 21st century’s premier vocal groups, blending deeply felt emotions with classic Country sounds. While ushering more than 18 million album units, 34 million tracks sold and nearly five billion digital streams, the trio recently earned their 11th career No. 1 with the multi-week and GOLD chart topper “Champagne Night.” Additionally, the trio earned the biggest first week streams of their career with their critically acclaimed No. 1 album OCEAN (BMLG Records). Known for their 9X PLATINUM hit “Need You Now,” which is the highest certified song by a Country group, they have earned CMA Awards Vocal Group of the Year trophies three years in a row and countless other honors including five GRAMMY® Awards, Billboard Music Awards, People’s Choice Awards, Teen Choice Awards and a Tony Award nod. The trio recently announced details for their newly formed LadyAID Scholarship Fund, supporting students attending Historically Black Colleges and Universities, and were honored with an invitation to become members of Country’s longest standing musical institution in January – the Grand Ole Opry.