We look forward to welcoming Kid Rock back to Billy Bob’s Texas on Friday, January 14 & Saturday, January 15 to celebrate his Birthday Bash Weekend!  We offer a one of a kind experience in the heart of the Fort Worth Stockyards! While you’re here check out the Honky Tonk Kitchen, Billy Bob’s gift store, and the Handprint Wall of Fame! 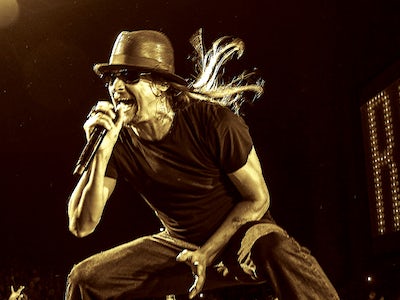 On August 20 & 21 of 2021, Kid Rock plays two back-to-back sold-out shows. The crowd goes wild and confetti covers the entire showroom by the end of the night.

Kid Rock burst onto the music scene in 1998 with his Devil Without a Cause album and hasn’t looked back. From hit singles like “Bawitdaba” and “Cowboy” to “Picture” and “All Summer Long,” he has blazed his own trail in the music world, having sold over 26 million albums to date and continuing tour. Kid Rock holds the Michigan record for most tickets sold with 150,000 for a run of ten consecutive sold-out shows, and recently set the Little Caesars Arena attendance record in his hometown of Detroit with 86,893 attendees in six sold-out shows.