We look forward to welcoming Kevin Costner & Modern West – Tales from Yellowstone 2021 Tour to Billy Bob’s Texas on Sunday, August 29, 2021.  We offer a one-of-a-kind experience in the heart of the Fort Worth Stockyards! While you’re here check out the Honky Tonk Kitchen, Billy Bob’s gift store, and the Handprint Wall of Fame! 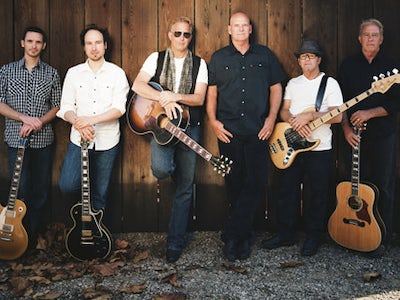 Kevin Costner & Modern West is a rock/country band which Costner founded with the encouragement of his wife Christine. He began a worldwide tour with the band in October 2007, which included shows in Istanbul and Rome. It also performed at NASCAR Sprint Cup Series races at Daytona International Speedway and Lowe’s Motor Speedway in Concord, NC.

The band released their debut country album, Untold Truths, on November 11, 2008 on Universal South Records. The album peaked at #61 on the Billboard Top Country Albums and #35 on the Top Heatseekers chart. Three singles (“Superman 14”, “Long Hot Night” and “Backyard”) have been released to radio, although none have charted. Videos have been made for the songs “Superman 14”, “Backyard” and “Hey Man What About You”.

In 2009, he went on tour with his band, the Modern West, and special guests The Alternate Routes. In August, at the Big Valley Jamboree in Camrose, Alberta, Costner and the band were scheduled next on stage when a severe thunderstorm struck, collapsing the stage and stands on the main stage. One person was reported dead and forty wounded. Later, an auction was held to raise money for the two young sons of the woman killed. A dinner with Costner was auctioned off for $41,000. Two guitars, one autographed by Costner, helped raise another $10,000 each.

In February 2010 Kevin Costner & Modern West released their sophomore album Turn It On only in Europe. To support the album the band went on tour in Europe, which has so far resulted in Turn It On reaching the album charts in Germany, Austria, Switzerland and Greece. The first single form the album “Let Me Be the One”, with special guest Sara Beck singing with Costner, was also made as a music video.