We look forward to welcoming Josh Abbott Band to Billy Bob’s Texas on Saturday, January 8.  We offer a one-of-a-kind experience in the heart of the Fort Worth Stockyards! While you’re here check out the Honky Tonk Kitchen, Billy Bob’s gift store, and the Handprint Wall of Fame! 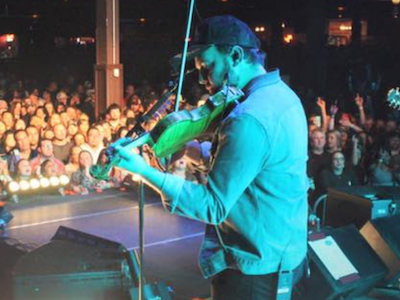 When fans of Texas-bred Josh Abbott Band hear the four-track EP Catching Fire, they’re likely to reconnect with a sound from the not-so-distant past. They’re songs of positivity, built on solid country textures and unified by Abbott’s congenial-but-experienced voice.

The seven-piece group cut its teeth as a hard-touring act with hooky melodies that deliver real-world stories. Led by the true-to-life cycles in Abbott’s life, JAB explored new territory with its last two albums – documenting the dissolution of a marriage in Front Row and adding strings and a horn section to Until My Voice Goes Out – but Catching Fire captures a sense of personal renewal.

“My embers are startin’ to glow again,” Abbott sings in the opening line of the title track. Indeed, the entire Catching Fire project is bright, spry, and optimistic. From the limber lines of Preston Wait’s fiddle to the decisive crack of Edward Villanueva’s snare and the animated scratch of Abbott’s acoustic guitar, there’s relaxed energy to the project, a sense of hard-won spirit that can only be developed by confronting – and conquering – emotional hurdles.

“We have a whole new refocused attitude on what we’re gonna do now moving forward,” Abbott says. “Catching Fire is a reflection of what’s happened over the last year and a half of my life.”

“Surprise Surprise” – a jaunty, driving bit of autobiography – details the rise and fall and rise again, namechecking banjo player Austin Davis in the opening line as it follows JAB’s 2006 inception and ascent to one of country music’s most dynamic live acts. Likewise, verse two loosely documents Abbott’s own relationship travails, from love to broken heart to a marriage that resulted in his first child.

While Catching Fire captures the band’s current heartbeat, the songs fit so neatly into the JAB live set that fans experienced them as if they were already part of the band’s canon.

“Half the time, I don’t even introduce them as new songs,” Abbott notes. “We just roll in and play them and watch the fans just bounce around and jam and have fun. Sometimes you’ll see fans look around like, ‘Do you know this song?’ But by the end of the song, they’re singing it.”

Country fans have been singing JAB songs for more than a decade already. The band got its start when Abbott and Davis, frat brothers at Lubbock’s Texas Tech University, braved the stage on open-mic nights at Blue Light Live. Davis managed to make the bluegrass-based banjo fit in a contemporary country setting, establishing a blueprint as additional members joined JAB. Villanueva brought a rock-band spirit on drums and Wait hardened the group’s country stance with his flagship fiddle when they signed on 18 months later. Lead guitarist Caleb Keeter joined in 2010, amping up the group’s power quotient, while keyboard player David Fralin took his place in 2015, bringing an additional layer of texture. The newest member – bass player Jimmy Hartman – added his name to the lineup in 2018, solidifying JAB’s signature tough undercurrent.

The band’s relentless on-stage attitude quickly made it a successful touring act, building out from a Texas band to a regional act to a national crew with a devoted following from coast to coast.

Concurrently, JAB developed its own label, Pretty Damn Tough Records, before that was an accepted practice in country circles. Two of their projects, Small Town Family Dream and Front Row Seat, scored top 10 debuts on the Billboard country albums chart, while five titles cracked the Billboard country singles lists, including a pair – “Oh, Tonight” with Kacey Musgraves; and “Wasn’t That Drunk,” with Carly Pearce – that represented the first chart appearance for current female country stars.

All that music established JAB as a band of renown: a good-timin’ cast with a plethora of sing-along songs that raised concert-goers’ spirits whether your date was a fellow college student or a series of longnecks from the bar.

“When you’re a young band, you wouldn’t know this, but those first couple albums you put out, that is who you are,” Abbott notes. “That is your sound.”

As any reasonable rebel does, the band tested its parameters once it was on solid footing. They signed for a short time with a major label, experimenting by mixing their raw tone with a more commercial edge. As they returned to indie status, Abbott ambitiously documented his first marriage in Front Row Seat. And the expansive Until My Voice Goes Out, recorded as Abbott tended to an ailing father, mixed elegant strings and a Memphis-tipped horn sound. His dad passed away just weeks before they finished the album, and it created a rite of passage that was particularly difficult to process in such a public occupation.

“There were nights in that first year after my dad died, I was bawling five minutes before we went on stage, and I’d have to wipe the tears away and throw on a smile and sing ‘My Texas,’” Abbott recalls. “A good time is what they come for, and I didn’t want to rob them of their experience because of a hardship that I’m going through in my life. I could mourn my father when I was in the back of the bus. The time for it wasn’t when I was on stage.”

Those concerts, in fact, planted some of the first seeds of renewal in Abbott’s life.

“When you’re able to have fun with a crowd of people and sing and dance around on stage, it’s definitely therapeutic,” he says.

As he put the pieces back together and felt a personal sense of renewal, the band as a whole felt a need to get back to its own roots. They took the four new songs – the Abbott/Wait compositions and the two outside pieces – and teamed with accomplished producer Marshall Altman (Marc Broussard, Frankie Ballard, Aaron Watson) for sessions at the Sonic Ranch on the outskirts of El Paso.

The multi-studio facility, nestled in a working pecan orchard, is appointed with bright tapestries and cozy casitas – residences that provide uncanny flexibility. Billy Gibbons, Third Eye Blind, Midland, and Portugal. The Man are among the acts who’ve found inspiration at the Ranch. JAB typically recorded into the wee hours of the morning, hitting their creative stride around the hours when their biological clocks reach their live-performance peak.

“Generally when you record in the studio, you’re working daytime hours,” Abbott says. “But out here in this place, it’s your studio basically; you can do what you want. There were nights that we were recording till 2 or 3 a.m., and then the next day we just wouldn’t start until noon. That’s musician time. We’re so wired to really get our brains going at 10 p.m.”

“If you didn’t know any better, you would have thought Jon Pardi or Luke Combs could have been from Texas,” Abbott says. “I just look at what’s going on in music – not only with the Texas people but with some of the others that are succeeding from other states – and I just hear similarities.”

Catching Fire brings a sense of similarity back to JAB’s own foundation. It’s a return to the band’s sonic past, a revival of its bar-bred optimism and fiery individualism. And it’s a reflection of the group’s off-stage cycles as old chapters are closed and a renewed, upbeat storyline comes to life.

“It’s not about being sad, it’s not about losing a father or going through a divorce,” Abbott says, elaborating on its current emotional position. “We have a great career, we have a great fan base, we’re still making music for a living. I have a beautiful wife and little daughter that brings me to join every day. So there’s a whole lot of personal renewal, and Catching Fire represents all of that. There’s nothing slow, nothing sad.”