We look forward to welcoming Jolie & Sonny Burgess to Billy Bob’s Texas on Friday, January 31. We offer a one of a kind experience in the heart of the Fort Worth Stockyards! While you’re here check out the Honky Tonk Kitchen, Billy Bob’s gift store, and live bull riding!

Come on down to the World’s Largest Honky Tonk during the Fort Worth Stock Show and Rodeo to enjoy local favorites Jolie & Sonny Burgess!

**Show any Fort Worth Stock Show rodeo ticket or grounds pass for free daytime admission & general admission to the concert on Friday, January 31.** 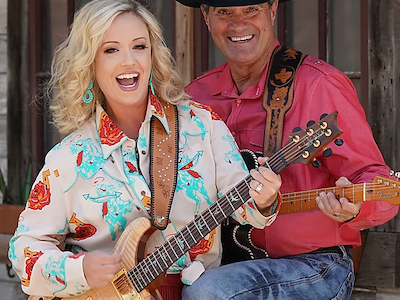 Sonny Burgess is a true Traditional Country Music Artist. He is a CMA Artist Winner and Texas Country Music Hall of Famer. His discography of four releases has scored 11 top 10’s in the Texas Country Music Charts. His Classic Hits “Cowboy Cool,” “The More I’m Around Some People (The More I Like My Dog,” “Jesus and Bartenders,” “When In Texas,” “Little Bit Stronger,” “She Don’t Make It Easy, “All Kinds Of Beautiful” and most recent “Dang Good Thing” from his latest release are renowned.

Jolie Holliday is an International Country Music Star. Jolie’s debut CD “A Real Good Day” was tremendously successful, garnering the Dallas native a number of awards, and entered the European charts at #1! She also received the Young Talent of the Year award at the German CMA Awards as well as Female Vocalist of the Year and Album of the Year at the CMA Indie Awards.