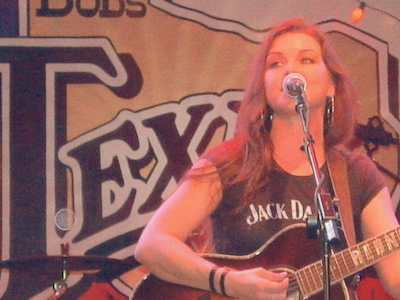 Gretchen Wilson took the country music world by storm when she released her #1 hit song “Redneck Woman” in 2005. She immediately Landed an opening slot with Brooks & Dunn and would go on to tour with Kenny Chesney the following year. Since the days of being an opening act, Wilson has been fortunate enough to have been able to host artist like Trace Atkins and Van Zandt. 2012 was a prolific year for Gretchen as she would embark on one of the years hottest tour packages “The Outlaw Tour with ZZ Top and 3 Doors Down”.

In 2014 Gretchen took some time off to be a full time mom to her daughter but recently returned with an album and a tour that picks up right where she left off! Her live show is promising to be a trip back to the old days featuring familiar titles and a band that rocks as hard as the Redneck Woman does.

Gretchen will be featuring the next “redneck woman” on her label during her shows this summer. Jessie G has recently signed with Gretchen’s label Redneck Records, and will be giving fans a preview of what they are working on.

Gretchen Wilson, whose debut CD Here for the Party would reach Number 2 on the Billboard album charts, makes her Billy Bob’s debut in June, 2004. The show draws about 6,000 people, and Wilson performs a set featuring her songs and cover tunes like Charlie Daniels’ “Long Haired Country Boy,” “Straight On” by Heart and John Prine’s “Angel from Montgomery.”