We look forward to welcoming Cory Morrow to Billy Bob’s Texas on Saturday, September 18.  We offer a one-of-a-kind experience in the heart of the Fort Worth Stockyards! While you’re here check out the Honky Tonk Kitchen, Billy Bob’s gift store, and the Handprint Wall of Fame!

Show Details
Cory Morrow at 10:00 PM on the Main Stage
House Band at 8:00 PM on the Honky Tonk Stage
Doors Open at 6 PM 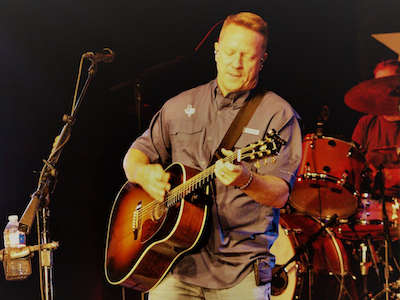 The night of June 17, 2011, Cory Morrow stepped on the main stage to record his “Live at Billy Bob’s” album was his 30th show at Billy Bob’s Texas.

Cory Morrow didn’t become a Texas legend by being quiet. He sings about strippers and Jesus with equal fervor. While this dichotomy may leave those on either side of the moral equator perplexed – the answer is actually very simple. Cory Morrow is beautifully and uncomfortably transparent. From the beer-soaked, cocaine laden days of his early career, to today’s more sober and spiritual leg of the journey, one thing about Morrow has never changed – as goes Cory’s life, goes Cory’s songs – and that’s never been more evident than on his newest studio release “Whiskey & Pride”.

The record is an aggressive blend of early Morrow sound with a current day perspective. Vintage feel from an evolving heart and mind. The title track, “Whiskey & Pride” features the age-old struggle of love versus ego and cleverly straddles the line of sermon and self-deprecation. The twist comes in the form of a mirror behind a bar that reveals the true identity of the accuser. The track, which is also the first single release, features the Texas Country-style instrumentation prevalent in Morrow’s early days, including steel guitar phenom and producer of “Whiskey & Pride”, Lloyd Maines.

“Whiskey” boasts twelve songs previously unrecorded, including two covers giving nod to mentors Rodney Crowell (Funny Feeling) and Jerry Jeff Walker (Hill Country Rain). Quite possibly, the jewel for fans is “Always and Forever”, an iconic Morrow ballad that has only appeared on live recordings. Cory is joined by the unforgettable Jamie Lin Wilson on the long-awaited studio version of the classic.

“Whiskey and Pride” runs the gamut on subject matter from the daily grind (Restless, Blue Collar) to living in the moment (Breath, Let’s Take This Outside). Musically, it explores the spectrum from tender (Smile, Daisey) to raucous (One Foot, Revival), and includes spectacular moments from long-time band-leader and coveted studio guitar player John Carroll. “Whiskey” seamlessly weaves its way through simple and sweet, moody and complex, and offers equal doses of introspection and fun.

If the record, and this phase of Morrow’s career, had to be summed up in one word – the word would be “real”. As evidenced by his latest recordings, live shows, and online communication with fans, he’s not pandering, he’s simply doing what he knows. Pulling back the curtains, letting us in, and letting the chips fall where they may.

“Whiskey & Pride” is much more than a collection of songs. It’s another mile-marker in the journey of Cory Morrow.