We look forward to welcoming Copper Chief to Billy Bob’s Texas on Friday, October 2. We offer a one of a kind experience in the heart of the Fort Worth Stockyards! While you’re here check out the Honky Tonk Kitchen, Billy Bob’s gift store, and the Handprint Wall of Fame!

Show Details
Copper Chief at 10:00 PM on the Main Stage
Hazard County at 8:00 PM on the Honky Tonk Stage
Doors Open at 6 PM
*Please note that there will be no valet or bull-riding on this night. 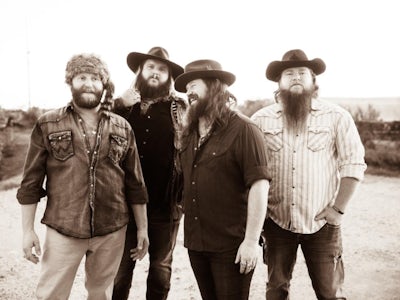 With rock ’n’ roll attitude and a grassroots country approach, Copper Chief is comprised of Mike Valliere (vocals, guitar), Rio Tripiano (vocals, lead guitar), Justin Lusk (vocals, bass), and John Jammall II (drums). This Austin/New Braunfels, TX based outfit has been tearing down highways from coast to coast over the last year and were recently featured as finalists on USA’s “Real Country” with Travis Tritt along with being voted the Texas Regional Radio Report’s “New Band of the Year 2019”. A bucket of personality, tight three-part harmonies, undeniable Texas swagger, and intricate musicianship blend seamlessly together as the foundations of this group. They have produced a truly unique blend, drawing from the musical canons of several Southern styles including roots, rock ‘n’ roll, country, soul, swamp, psychedelic, and blues. This unapologetic sound paired with their high energy and free flowing live show has been hailed as a refreshing experience among today’s musical climate. The debut, self-titled album released December 2017 has spawned 2 singles and was met with acclaim from both fans and radio personalities alike. Their passion is evident with every “leave it all on the stage” performance in front of steadily growing crowds, so don’t be late, come see what all the fuss is about! #hailtothechief