We look forward to welcoming Cole Swindell to Billy Bob’s Texas on Friday, October 22, 2021. We offer a one-of-a-kind experience in the heart of the Fort Worth Stockyards! While you’re here check out the Honky Tonk Kitchen, Billy Bob’s gift store, and live bull riding!

Show Details
Cole Swindell at 10:00 PM on the Main Stage
House band on the Honky Tonk Stage at 8 PM
Doors Open at 6 PM 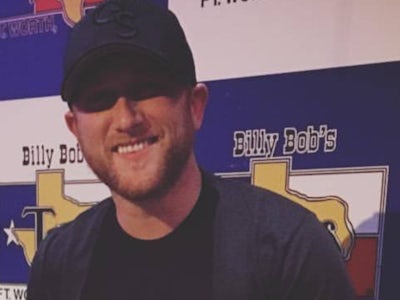 Cole Swindell concreted his hands to add to Billy Bob’s “Wall Of Fame” on September 22, 2017.

As a songwriter and a singer, Cole Swindell is one of the linchpins of the breezy country-pop sound that became known as bro-country in the 2010s. Swindell first came to prominence as a songwriter for Luke Bryan, a fellow alumnus of Georgia Southern University, but around the time Bryan took “Roller Coaster” to number one, Swindell began his own climb up the charts. He racked up several big hits in the middle of the 2000s — “Chillin’ It,” “Hope You Get Lonely Tonight,” “Ain’t Worth the Whisky,” “You Should Be Here” — that became emblematic of the sound of the mainstream country of its era: friendly, melodic, and sunny, blending elements of rock and hip-hop with country.

Born in Bronwood, Georgia on June 30, 1983, Cole Swindell began to pursue music while he was a college student. After spending time at Dawson’s Terrell Academy, he transferred to Georgia Southern University, where he happened upon Luke Bryan, a fellow member of the Sigma Chi fraternity. Bryan returned to GSU to play a show while Swindell was attending college and the two became fast and enduring friends. Once he left university in 2007, he entered Bryan’s team, selling merchandise for the star and spending his spare time writing songs.

Swindell signed with Sony/ATV Publishing in 2010 and soon began landing prominent placements. Bryan recorded a number of Swindell songs, including the hit “Roller Coaster,” but the fledgling songwriter also had Thomas Rhett, Scotty McCreery, and Craig Campbell cut his tunes. As he gained a foothold as a songwriter, Swindell made tentative steps toward a performing career, releasing “Chillin’ It” independently in 2013. It did well enough to earn the attention of Warner Music Nashville, who signed Swindell in July of 2013, then re-released the single to country radio. “Chillin’ It” wound up climbing to number one on Billboard’s Hot Country charts, crossing over to 28 on the pop Top 40.

Down Home Sessions”Chillin’ It” launched Swindell into the mainstream, setting up the release of his eponymous debut in February 2014. The album generated two number one hits on the Country Airplay charts that year — “Hope You Get Lonely Tonight” and “Ain’t Worth the Whiskey” — and they shared space on the charts with “This Is How We Roll,” a song he co-wrote with Luke Bryan, who recorded the tune with Florida Georgia Line. As he worked on a new album, Swindell released an EP called Down Home Sessions in November 2014; the Down Home Sessions would become a late-year tradition for the singer, who released an EP every November or October into 2017.

You Should Be HereSwindell’s purple patch extended into 2015 when he won ACM’s New Artist of the Year award and “Let Me See Ya Girl” was pulled from his debut; it went to number two on the Country Airplay charts. “You Should Be Here,” the first single from the album of the same name, was released in December 2015 and worked its way to number one on the Country Airplay charts in early 2016. “Middle of a Memory” reached the same position a little after the May 2016 release of You Should Be Here. “Flatliner,” a duet with Dierks Bentley, kept the album in the charts into 2017 — it peaked at two on Country Airplay — after which time, Swindell turned to record his third album. Entitled All of It, the record appeared in August 2018, preceded by “Break Up in the End,” which peaked at six on Country Airplay. The following year saw the release of the singles “Down to Earth,” “All Nighter,” and “Drinkin’ Hours.” 2020 brought the ruminative but punchy “Single Saturday Night.”