We look forward to welcoming Chris Cagle to Billy Bob’s Texas on Saturday, May 28.  We offer a one-of-a-kind experience in the heart of the Fort Worth Stockyards! While you’re here check out the Honky Tonk Kitchen, Billy Bob’s gift store, and the Handprint Wall of Fame!

Show Details
Chris Cagle at 10:00 PM on the Main Stage
House Band at 8:00 PM on the Honky Tonk Stage
Doors Open at 6 PM 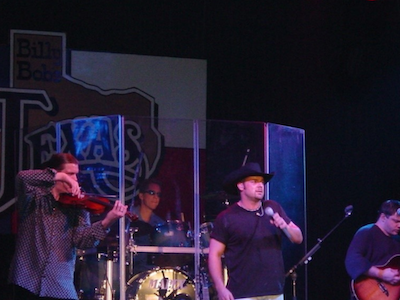 Chris Cagle once serenaded a fan over the phone while playing on the main stage here at Billy Bob’s Texas.

When he was four years old, Chris Cagle moved from Louisiana to the outskirts of Houston, where he grew up. He began taking guitar lessons at six, but gave them up after a year. He took piano lessons during high school and returned to the guitar in his senior year. After high school, he enrolled at the University of Texas at Arlington, but dropped out at 19 to pursue a musical career. He moved to Nashville in 1994 and struggled for five years. His earliest songs were published by famed Nashville songwriter Harlan Howard, after which he landed a publishing deal and placed some of his songs with David Kersh. He was discovered by the assistant to the president of Virgin Records Nashville, whom he met in a restaurant where he was working. Virgin signed him and released his debut single, “My Love Goes on and On,” which reached the country charts in July 2000, eventually peaking in the Top 20. His first album, Play It Loud, followed in October. It reached the country charts, and its track “Laredo” made the country Top 40. In 2001, Cagle switched from Virgin to Capitol Records (both are subsidiaries of EMI), and his new label reissued Play It Loud in June 2001 with two bonus tracks. A self-titled album came in 2003, followed by Anywhere But Here in 2005, which reached the Top 40. My Life’s Been a Country Song appeared in 2008. The compilation album The Best of Chris Cagle appeared on Capitol in 2010. After a few years spent away from the music industry, during which time he built a ranch, got married, and had his first child, Cagle signed with the label Big Picture Music Group. In 2011, Cagle issued the single “Got My Country On” as a precursor to the studio album Back in the Saddle, which was set for a 2012 release.