Garth, a newcomer from Oklahoma, plays his first show for a $5 ticket to a crowd of 500. He signs autographs from the stage to everyone who wants one and places his hands in concrete. Garth returns in December of 1989 to a sold-out crowd.

Garth Brooks plays his last show at Billy Bob’s to date on Nov. 21, 1990. Brooks was scheduled to play the State Fair of Texas in Dallas in October. Billy Bob’s is unable to promote the November date until Brooks takes the stage at the State Fair. To promote the show, Billy Minick hires an airplane to fly a banner announcing Billy Bob’s date. Garth notices the plane and its message. Enthusiastically, he points up, and he says “Guess you know where I’ll be playing next!” Tickets to the show sell out in 12 minutes the next day. To cap off the event, Brooks even judges a “Garth Brooks Look-Alike” contest.

Garth Brooks returned to Billy Bob’s on August 23, 1992, to promote his release of “Beyond the Seasons,” his Christmas CD benefitting Oklahoma’s Feed the Children Charity. More than 2000 attended the event. 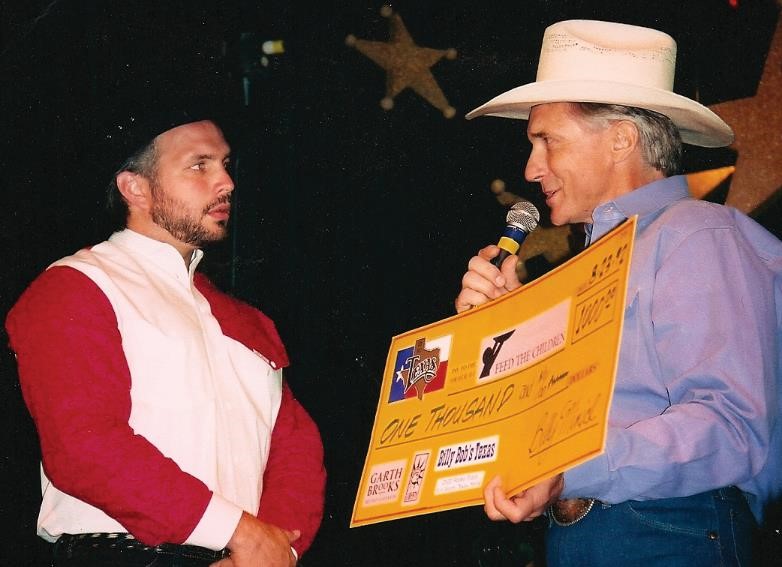 The youngest of six children, Garth grew up in Yukon, Oklahoma, an oil town near Oklahoma City. He first moved to Nashville in 1985, only to return home 23 hours later. After completing a degree in advertising at Oklahoma State University, he ventured back to Music City in 1987 and within six months signed a recording contract with Capitol Records.

Garth’s first single, “Much Too Young (To Feel This Damn Old),” from his self-titled debut album, hit No. 8 on the charts. More big hits followed: “Not Counting You,” “The Dance,” and “If Tomorrow Never Comes.”

The only male artist to have four albums — No Fences, Ropin’ the Wind, The Hits, and Double Live — each exceeds sales of 10 million, Garth has sold more than 128 million records. That total places Garth second only to The Beatles as the best-selling act of all time, according to the Recording Industry Association of America.

In 1997, Garth’s Central Park concert in New York drew the largest crowd the park had ever seen. The HBO special Garth Live from Central Park was that year’s most-watched cable television special.

In October 2000, Garth announced a retirement from touring and recording, and he released his Scarecrow album the following year. But even retirement couldn’t keep Garth away from the Opry. He appeared as part of the Opry’s 80th-anniversary celebration — singing with Porter Wagoner, Bill Anderson, Jimmy Dickens, and Steve Wariner — in 2005 (the same year he married fellow Opry star, Trisha Yearwood). He also inducted Carrie Underwood into the Opry cast in 2008.

Garth Brooks just won Entertainer of the Year at the CMA Awards for a sixth time, a first for any artist. He is also the first artist in history to receive 7 Diamond awards for the now seven albums certified by the RIAA at over 10 million album sales each and remains the #1-selling solo artist in U.S. history certified by the RIAA with over 148 million album sales. Garth has been inducted into the International Songwriters Hall of Fame in New York, the Nashville Songwriters Hall of Fame, the Country Music Hall of Fame, and most recently, the Musicians Hall of Fame.