FORT WORTH, Texas –   Billy Bob’s Texas celebrated its 40th Anniversary this weekend with Hank Williams Jr. headlining back-to-back nights at the iconic Texas venue. This was Williams’ first show at the Honky Tonk since 1986 and to celebrate his return he brought a few famous friends along for the ride. 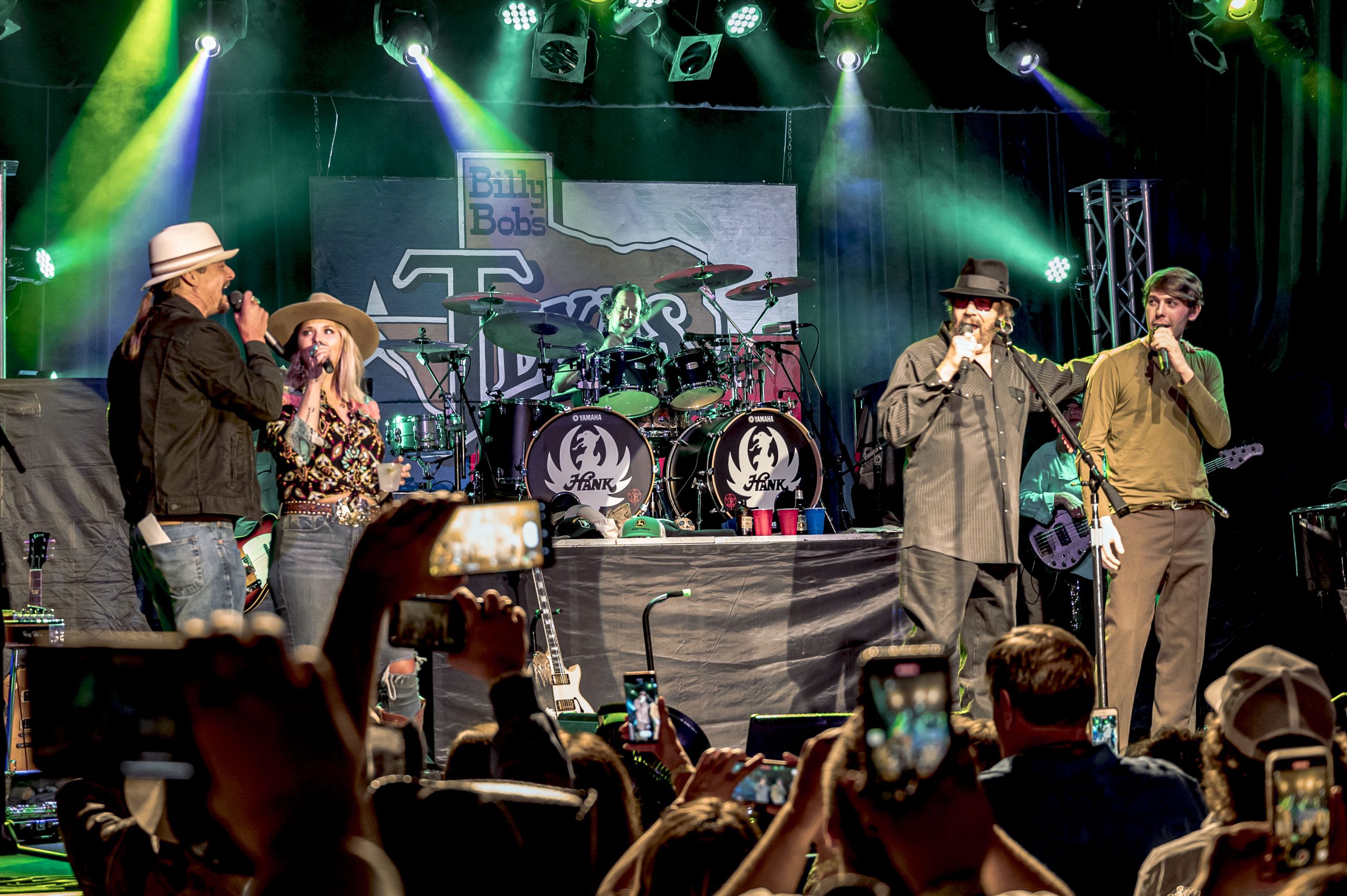 Hank Williams Jr. was joined by Kid Rock, Miranda Lambert, as well as his son Sam Williams, for a grand finale performance of his hit song “Family Tradition.” Lambert is set to return to World’s Largest Honky Tonk to perform five dates at the end of the month.

Tickets to those shows are sold out, but the anniversary festivities are set to last through the entire month of April and beyond with performances from Midland, Dwight Yoakam, the Bellamy Brothers, Thomas Rhett, Gary Allan and more.

More new shows have just been announced to the Billy Bob’s concert calendar.

There are few artists whose names are synonymous with one instrument and how it’s played in service to an entire genre. Utter the phrase “young blues rock guitarist” within earshot of anyone with even a cursory knowledge of the modern musical vanguard and the first name they are most likely to respond with will be Kenny Wayne Shepherd. The Louisiana born axeman and songsmith has sold millions of albums while throwing singles into the Top 10, shining a light on the rich blues of the past and forging ahead with his own modern twist on a classic sound he has embodied since his teens.

In a 20-year recording career that began when he was just 16, Shepherd has established himself as an immensely popular recording artist, a consistently in-demand live act and an influential force in a worldwide resurgence of interest in the blues. From television performances on The Tonight Show with Jay Leno, The Late Show with David Letterman, Jimmy Kimmel Live and Late Night with Jimmy Fallon (amongst others) to features in Rolling Stone, Vanity Fair, Maxim Magazine, Blender, Spin, USA Today and more, his musical career has been nothing short of phenomenal.

At 16 years old, he signed his first record deal and burst onto the national scene with the release of his 1995 debut album Ledbetter Heights, which produced the radio hits “Deja Voodoo,” “Born with a Broken Heart” and “Shame, Shame, Shame.” His relentless touring and success on rock radio helped to drive the album to Platinum sales status. His 1998 sophomore effort Trouble Is… also went Platinum, yielding such radio hits as “Blue on Black,” “True Lies” and “Somehow, Somewhere, Someway.” 1999’s Live On spawned the radio hits “In 2 Deep”, “Shotgun Blues” and “Last Goodbye.”

2004’s The Place You’re In was a blistering rock record and was followed up by 2007’s ambitious 10 Days Out: Blues from the Backroads, for which Shepherd and his band traveled throughout the American South to record with such vintage blues greats as B.B. King, Clarence “Gatemouth” Brown, Hubert Sumlin, Pinetop Perkins and David “Honeyboy” Edwards on their home turf. 2010 saw the release of Shepherd’s long-awaited first live album, Live! In Chicago, recorded at Chicago’s House of Blues during the all-star Legends tour and featuring guest appearances by such blues legends as Hubert Sumlin and Willie “Big Eyes” Smith. The live disc debuted at #1 on Billboard’s Blues chart, as did 2011’s How I Go. In 2013, Shepherd further expanded his musical horizons by teaming with veteran rockers Stephen Stills and Barry Goldberg to form THE RIDES, whose first album Can’t Get Enough helped to expand Shepherd’s audience as well as his musical resume. 2014 saw the release of Goin’ Home, Shepherd’s sixth # 1 debut on the Billboard Blues charts. Goin’ Home features several talented friends who shared Shepherd’s enthusiasm for the project’s back-to-basics ethos. In the months since its release, Shepherd and his band have toured the world extensively blazing a fresh trail for the historical American art form in the 21st Century.

House Band on the Honky Tonk Stage at 8 pm

Also known as Raw Dawg, is an American blues-rock guitarist, originally hailed as a child prodigy. As of 2019 Gales has recorded eighteen albums for major record labels and has done session and tribute work. He has also contributed vocals on several records by the Memphis rap groups Prophet Posse and Three 6 Mafia under the name Lil E.

As a renowned guitarist he has performed with: Carlos Santana at Woodstock in 1994 and in July 2016, Zakk Wylde who also appeared on 2014s Good For Sumthin’ and Eric Johnson who also appeared on the same album. He also toured as part of the Experience Hendrix tour with legend after legend including Bootsy Collins & Robert Randolph and has also collaborated with Lauryn Hill many times.

It’s no wonder why he is the guitarists’ favourite guitarist, counting fans in the likes of Tony Rombola (Godsmack), Tosin Abasi (Animals as Leaders), Joe Bonamassa and Carlos Santana. Dave Navarro (Jane’s Addiction) said “how Eric Gales isn’t the hugest name in rock guitar is a total mystery” and Mark Tremonti (Alter Bridge) also claimed “this guy could be the best player on Earth.”

Gales proudly tells his story every night before every show, now over two years sober he is creating some of the most breath-taking music he has ever made. Talking about his approach to song writing in this time he reflects. “I guess the songs would answer the question more or less, I definitely don’t have anything clouding my view and it’s definitely a much more pure place its coming from.”

In December 2018, he announced that he will be releasing his new studio album ‘The Bookends’ (Provogue/Mascot Label Group) on 8th February 2019. The album was recorded with Matt Wallace (Maroon 5, Faith No More, The Replacements) and features collaborations with Beth Hart, Doyle Bramhall II and B. Slade.