SOLD OUT! Plan to arrive early as the process to get into BBT will take longer than normal due to the new COVID-19 safety protocols.

We’ve hit our social distanced limited capacity for Josh Abbott Band — in other words, the show is sold out!

We know things have been more than a little crazy the past several months, but we appreciate you hanging in there with us. Your kindness, patience, and understanding have made a world of difference to our team.

We look forward to welcoming Josh Abbott Band to Billy Bob’s Texas on Saturday, August 29. We offer a one of a kind experience in the heart of the Fort Worth Stockyards! While you’re here check out the Honky Tonk Kitchen, Billy Bob’s gift store, and the Handprint Wall of Fame!

Show Details
Josh Abbott Band at 10:00 PM on the Main Stage (NEW SHOW TIME!)
Doors Open at 6 PM
Please plan to arrive early as the process to get into Billy Bob’s Texas will take longer than normal due to the new COVID-19 safety protocols. 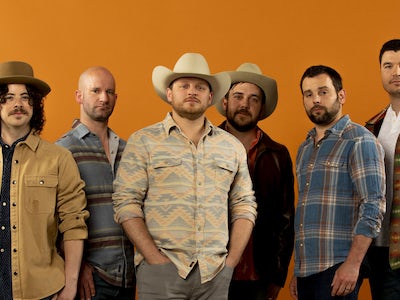 Thanks to its inherently upbeat and singable material, Josh Abbott Band has become one of the

including “Oh, Tonight,” the first charted track to feature Grammy-winning Kacey Musgraves – and

nabbed a Top 10 album with the 2012 release Small Town Family Dreams and reached No. 12 with the

2014 EP Tuesday Night. The six-piece ensemble is releasing its most ambitious project to date with the

2015 album Front Row Seat, a song cycle that follows a relationship from first meeting through its

euphoric rise to a difficult breakup and contemplative aftermath. The release is accompanied by a national

tour that takes the band to some of America’s most iconic country clubs.